This scene has been removed from your cart.

You do not have enough in your account to make this purchase.

Please choose how much you wish to deposit.

Muscle Butt Stone, the Hardcore Heavy Metal Singer in a Band from Southern California is Back, proudly showing off his tan lines and ripped All American Blue Collar body with a tight 8 pack of abs, the perfect amount of man hair between his pecs and smooth bright white bubble butt, who agrees to be our "Naked Houseboy" as he strip naked and washes the dishes in the kitchen with his low hanging balls dangling between his smooth yummy ass cheeks,  then stokes his throbbing belly slapper with his soapy hands, talks frankly about his life in Hawaii, fully nude, with a rock hard boner, sits down on the balcony for a naked chatty smoke and a a long strokes session, bust a awesome thick creamy load of Heavy Metal Jizz which totally coats his entire throbbing cock and balls, before taking an outdoor "Hawaiian Shower" under the garden hose, bending over repeatedly giving us great views of his blue collar marble butt cheeks and donkey balls as he bends over and cleans his feet or the second time on camera in this EXCLUSIVE new video from Island Studs!  Stone is a total blue collar Construction Worker / Heavy Metal Guitarist Fantasy Man with an impressive 8 pack of abs muscles. "Other than my tattoos, I look a helluva lot different from the last shoot," Stone states with a rare smile as he turns to the camera while washing dishes at the kitchen sink. "I lost 10 pounds on a liquid diet', he state proudly in his rugged, cigarette smoking, hardcore voice.  This 27 year old, scruffy straight man, has the sexy, cocky self assured "I don't give a fuck what anyone thinks" attitude and banging blue collar body of a real Rock Star. Stone's very first time on camera, jerking off and pissed twice, is still online in the IslandStuds.com Members ONLY Area. Do NOT miss him shaving his head, bald, fully naked, in front of a full body mirror, stacking cinder blocks with his big balls dangling between his massive man butt and then stroking his veiny dick and cuming on camera for the First Time in Stone #1 Video! He is now employed 40 hours per week "building houses" on the Island of Oahu. Check out his smooth creamy white virgin Heavy Metal Band Butt and his perfect tan lines as he washes up the dishes after we had lunch! What a sweet naked tattooed Hardcore Houseboy! After his nudist house chores, Stone sits down for a smoke and a very long stroke session outdoors. Watch him slow strokes and fast jerks his amazing veiny belly slapper! But the best part of this video is watching him cum, looking down at his sticky hand and jizzed covered cock and commenting about the Big Load he just delivered on camera for us all to see. "It looks like I have paste all over my junk," he states with another rare smile into the camera. Stone is a Str8 Up Hardcore dude! Look as he walks, fully naked and dripping cum, down a LONG flight of stairs, grabs a garden house and takes a long and sexy "Hawaiian Outdoor Shower"! His heavy nut sack repeatedly dangles between his smooth white muscle butt as he soaps up his sexy blue collar body and sprays it clean with the garden house! Stone you are just so HOT to watch totally wet! We are so pleased Stone has returned for his second photo shoot for IslandStuds, before he returns to California to tour with his Heavy Metal Band! Horny self assured, cocky, Rocker Stone will excite you! Check out the entire Island Studs' Stable of sexy, balls out Musicians and their boners and Beefy Blue Collar Studs jerking off and pissing in the IslandStuds.com Members Only Area! Join Today for Unlimited Streaming and Unlimited Downloads in our Members Only Area! Instant Access Now!

See Stone in his very First Time Modeling Nude and Cuming on Camera is his debut video - Exclusive on Island Studs here:

While Stone continues to tour with his band, he is also a successful Life Coach at Metal Lotus. Click on the link to see just how sexy he looks today and sign up for the Newsletter for his professional coaching services at: http://themetallotus.com 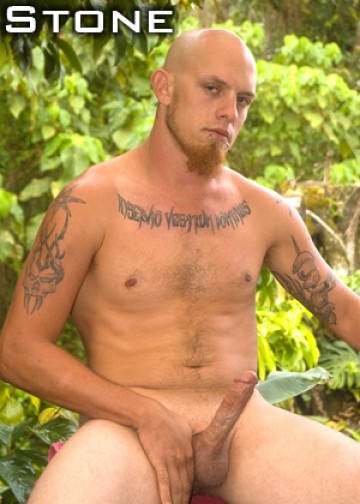